Hashtags are a huge part of our work as a Cape Cod social media marketing firm. They have to be — I don’t want to sound dramatic, but to ignore this tagging tool is to doom your marketing efforts to eternal mediocrity. 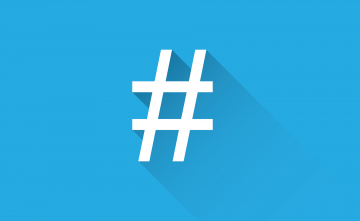 The hashtag came into the world in 2007 when it was first advocated for and used on Twitter by Chris Messina, a Silicon Valley product designer looking for a way to categorize social media content. That year, Messina tweeted out the first hashtag used on that platform: #barcamp, referring to a series of technology conferences he had a hand in creating.

Were you hoping the first hashtag ever was going to be something cooler? Maybe something like #tacos or #puppies? Me too. But despite its less-than-thrilling first iteration, the hashtag promptly took over the world and has barely let up since.

In recent years, though, the online community has grappled with a persistent rumor: that hashtagging as a marketing effort is on its way out, and that the practice is now considered outdated and unnecessary. Is there truth to this? I did some research, and the answer is . . . sort of.

First things first: hashtags work. According to digital marketing site 9 Clouds, social media posts that include hashtags almost always perform better than posts without them. The tags generally increase engagement; this is true on Facebook, Instagram, and Twitter.

However, according to a study detailed by Mention, it’s the amount of hashtags that now requires specific planning and research. The study in question found that, as a general trend, the more hashtags you include with a post, the less engagement you’ll get.

What does that mean? Are we supposed to stick to one hashtag a pop now? Not quite. Smart Insights provides some in-depth information about engagement in relation to hashtag use. They found that on Instagram, accounts with fewer than 5,000 followers (or, for our purposes, most small businesses) achieve peak engagement when a post’s caption includes five hashtags and its first comment includes nine. Anything beyond those numbers results in a drop in engagement.

Marketing was a lot simpler back in the early days of hashtag hype, when using as many tags as possible, even popular tags that didn’t seem quite relevant to the content, was your best shot at peak engagement. Now, however, hashtags have become so saturated online that the most popular tags, broad terms like #love, #fashion, or #happy, are pretty much useless for visibility. Anyone searching the #love tag is going to be wading through millions of posts; the chance that they’ll stumble across your content in the process gets lower and lower as the hashtag becomes more popular.

Kind of discouraging, right? If we can’t rely on popular words and phrases to boost our posts, what are we supposed to do? Never fear. Digital marketing mecca HubSpot says that the key to success is narrowing down your used hashtags, nixing broad terms and making your chosen tags as specific and niche as possible. No one new will see your photo if it’s tagged #love or #Friday, but those in search of something specific are likely to come across it if you can anticipate their possible search terms. #HarwichHotels, for example, is a much narrower category, but its specificity greatly increases the chances that your content will find the right eyes.

Another way to carve out a niche is creating a campaign hashtag specialized for your business: a name or phrase that you can encourage followers to use and add to your bio for personalization.

So, are hashtags dead? No. They’ve just matured. Before, it was a race to use as many tags as possible and pray for engagement results. Now, it’s all about choosing the right tags for your specific offerings. Less is more; it just took the internet a while to realize it.