Marketing is hard. That’s why you’re reading this, probably! Or maybe you were trying to browse cardigans on Amazon and a few hasty clicks sent you to the wrong place. Who am I to say? For real, though, marketing is tricky. When all goes well, advertising efforts pay off and the message gets through to consumers loud and clear. But sometimes, a marketing move that makes perfect sense in theory can come to life as a giant mistake. Shall we take a look at a few of these failures? Some of them are so bad, guys. Get ready. 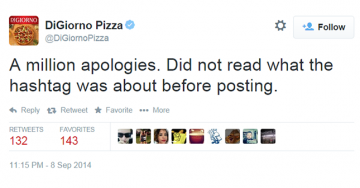 The fail: DiGiorno is the preferred frozen pizza brand of devil-may-care babysitters and recently single dads all over the country, and in 2014, the company proved itself just as absent-minded. In the wake of NFL player Ray Rice being fired for physically assaulting a woman he was dating, thousands of women took to Twitter to document their experiences in abusive relationships. The hashtag #WhyIStayed was used to fight back against the victim-blaming the incident had stirred up among terrible people who are terrible.

Whoever was manning the DiGiorno Twitter feed that day (my guess is an unpaid intern, because let’s be real) saw that the hashtag was trending, did not investigate what it referred to at all, and composed a quick tweet reading, “#WhyIStayed You had pizza.” Lovely.

The lesson: Um, research things? Even a little research is fine. Just do more than no research. 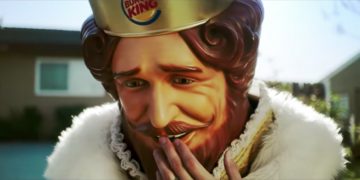 The fail: You know how sometimes you get really uncomfortable, then suddenly you’re hungry? No? Because that’s not a thing? Someone needs to let Burger King know.

Over the past decade or so, Burger King has gone down some very strange advertising routes. The company started by bringing back the King, a weird plastic-masked character who hadn’t appeared in its ads since the 1980s. The King is cool because when you look at him, you’re like, “Am I watching television, or am I having that mannequin nightmare again? Either way, you know what I’m not thinking about? Food.” Burger King has also run some print ads that are… how do I say this?… gross. For example, a sandwich called the BK Super Seven Incher was advertised using a woman, her open mouth, and copy featuring the word “blow.” A hearty round of applause to all involved in that artistic endeavor.

The lesson: When you’re brainstorming marketing ideas, instead of being creepy, just be not creepy instead. Err on the side of un-creepy. 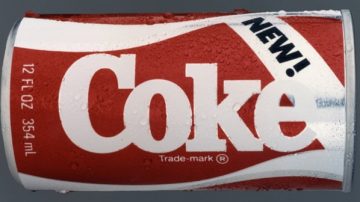 The fail: The New Coke saga is the marketing world’s ultimate cautionary tale. In the days before people cared that much about how crazy bad soda is for you, Coke and Pepsi used to be pretty obsessed with each other. In 1985, Coke let this competitive energy take over and decided to test out a new formula… for the country’s most iconic, beloved beverage. Do you see where I’m going with this?

New Coke actually earned high marks from test groups in terms of taste. But when your brand is basically synonymous with American culture, people aren’t going to be on board if you announce you’re throwing it out in favor of something new and improved. Customers were less than pleased (and many even distraught) about the loss of traditional Coke. Pepsi, on the other hand, saw a huge opportunity and started running ads pointing out how Coke had betrayed everyone and changed. Clever girl.

The lesson: Leave it. No, really, it’s working fine. You’re just bored. Don’t touch that. Go play outside or something. Just… just leave it. 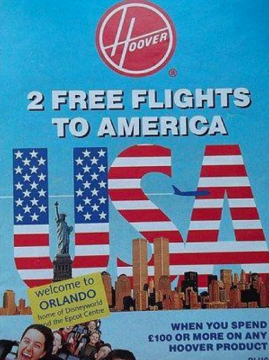 The fail: In 1992, the British division of the Hoover Company found itself with a surplus of vacuum cleaners and washing machines. In an effort to sell them off, the company ran a promotion offering free airline tickets to anyone who spent more than £100 on its products. The initial promo gave away two round-trip tickets to select European destinations. Very few of the vouchers were actually used (probably because planes are death capsules), and the surplus was cleared effectively.

But then Hoover expanded the offer to include tickets to the United States, because greed. Airfare to the U.S. at the time cost around £600, so the company’s £100 deal elicited a huge response. So huge, in fact, that Hoover lost all of its profit from the original promotion, plus an addition £20 million after paying for all those airline seats and settling legal claims.

The lesson: Math is important. Don’t sleep on math. 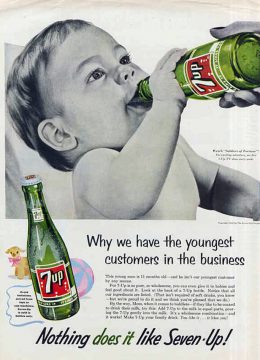 The fail: The 1950s were a different time. A time when a soda company could, in all seriousness, build an entire ad campaign around having “the youngest customers in the business” and depict babies guzzling down its sugary, syrupy product. Delish.

Part of this ad reads, “7Up is so pure, so wholesome, you can even give it to babies and feel good about it.” Can you, though? There was also a tip in there for overwhelmed 50s mothers: “By the way, Mom, when it comes to toddlers — if they like to be coaxed to drink their milk, try this: Add 7Up to the milk in equal parts, pouring the 7Up gently into the milk. It’s a wholesome combination — and it works!” Does it, though?

The lesson: This isn’t so much a failure of marketing as a failure of… logic? Health? The human spirit? I don’t know, man. Just don’t advertise with babies unless you’re in the baby business. 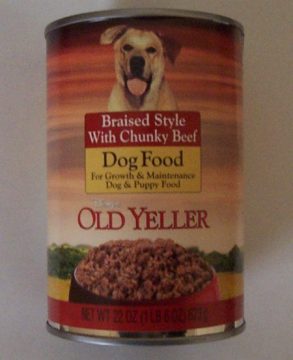 The fail: In 2005, grocery chain Kroger rolled out a new brand of dog food based on the Disney film Old Yeller, which, as we all remember, is about a dog being happy and that’s it. It is a trauma-less experience, right up there with Beaches and cutting out carbs, and I for one would like to be reminded of Old Yeller as often as possible.

The lesson: You have to start watching movies all the way through. I can’t do this with you again. 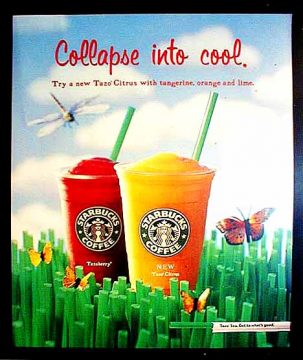 The fail: Why yes, that is a real print ad that Starbucks ran. In America. In 2002. Does this bring to mind any specific imagery from the collective national consciousness? If the building-like blades of grass, plane-shaped dragonfly and side-by-side cups don’t conjure anything for you, the choice of the word “collapse” ought to do it. 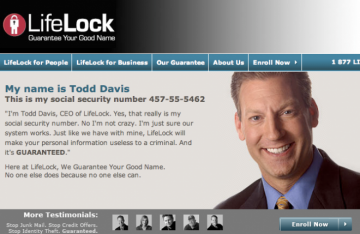 Of all these examples, I can at least understand the reasoning behind LifeLock’s 2010 campaign. Advertising your security service by exposing a vulnerability is a bold idea. Proving to your customers that you have that much faith in your product is an admirable move. But giving out your Social Security number is basically daring anyone who sees it to ruin your life, so before doing so, you should be positive it won’t backfire on you in the form of 13 instances of identity theft, a fine of $12 million from the Federal Trade Commission for deceptive advertising, and a freelance writer making fun of you nine years later.

The lesson: Sometimes it’s okay to advertise your service by just, like, explaining how it works.

Well, this has been a journey. I think we all learned a lot, and I certainly feel better about my own questionable choices. Thanks, Starbucks.