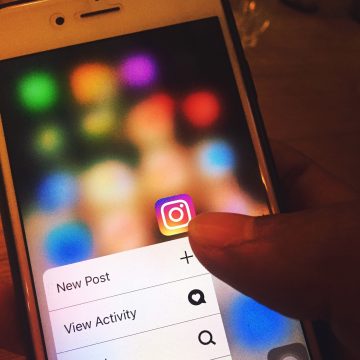 As a Cape Cod marketing firm, we’re in a very serious, long-term relationship with Instagram. We’ve spent quality time learning its lovable quirks, like the way it fluctuates wildly on how many hashtags it deems appropriate in a single post, or that time it decided only some accounts could add music to Reels for a while. You know, cute crap like that. We know Instagram, so we were quick to notice when it went through some changes recently. And we weren’t alone.

You may remember that in its infancy, Instagram was like … how do I put this … like Facebook, without all the inane distractions. The feed was clean, chronological, and full of photos. Just photos! Sure, they had captions, but they were easy to ignore if you wanted to, leaving you to scroll peacefully through heavily filtered shots of sunsets and tacos and dogs and stuff. It was awesome.

Over time, of course, things changed, and the Instagram we see today is full of influencers and advertisements and Stories and Reels and polls and gifs and stickers and swipe up to shop and the longest any of us goes without touching our phones is when we’re deeply, blissfully asleep. It’s a lot.

While it used to be a hip photo-sharing tool, these days, Instagram is mostly overwhelming and overcompensating. And why does anyone overcompensate? To mask insecurity. And why is Instagram feeling insecure? Because everyone has absolutely lost their minds for TikTok. The video platform has exploded in popularity over the past few years, particularly among younger social media users. In an interesting coincidence, around the same time TikTok took off, Instagram introduced its Reels feature, which allows users to, well, make TikToks. Rather than allowing TikTok to excel in video and keep focusing on photos (you know, the thing Instagram was made for), the overlords at Meta instead poured a ton of energy into copying something popular that already exists.

That brings us to the most recent Instagram drama. In May of this year, the platform announced it would be testing out a new look for its mobile app, notably the main feed. A limited group of users were introduced to this new version: what Instagram called an “immersive viewing experience” with full-screen videos and photos, including content from accounts users weren’t yet following. If this sounds vaguely familiar, it’s because it’s exactly how TikTok looks.

People did not love it. And not just regular people. Important people. Rich people. Kardashian people! Just days ago, Kylie Jenner shared a post on her Instagram story criticizing the recent push for video, which has been accompanied by a severe dip in engagement for many users. “Make Instagram Instagram again,” read the shared post, which went on to call out the app directly for “trying to be TikTok.”

The thing about Kylie Jenner is that she has 360 million Instagram followers. Her opinion actually means something, which is why just days later, Meta was like, ‘Just kidding, sort of! We’ll work on it!’

What they actually said was: “Based on our findings and community feedback, we’re pausing the full-screen test on Instagram so we can explore other options, and we’re temporarily decreasing the number of recommendations you see in your feed so we can improve the quality of your experience … We recognize that changes to the app can be an adjustment, and while we believe that Instagram needs to evolve as the world changes, we want to take the time to make sure we get this right.”

Oh, Kylie. Please continue to use your power for good.

Head of Instagram Adam Mosseri walked a fine line with his comments on the recent changes: “We’re going to continue to support photos, they’re part of our heritage. That said, I need to be honest: I do believe that more and more of Instagram is going to become video over time.”

So, is Instagram dead? Not yet. But with the copycat features, deflated engagement, and unhappy users, it’s having a potentially fatal identity crisis. Time will tell.