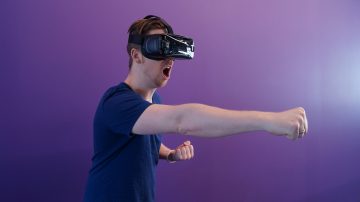 In my time at KDC, I’ve seen several transformations make their mark on Cape Cod social media marketing. In some ways, today’s internet is unrecognizable from the internet of just five years ago. (Fortunately, there are some constants that keep us all grounded, like Reddit threads about unsolved crimes, or the fact that people will always post far too many photos of their children. Always. I am only a childless millennial, but maybe instead of creating a permanent, public digital record of someone else’s life beginning the moment they’re born, we could wait until that human being is old enough to understand the digital landscape and let them opt in or out accordingly! I don’t know! Live laugh love!)

The latest overwhelming internet development is the concept of the metaverse. When you Google the metaverse, you’re informed that it’s “a virtual-reality space in which users can interact with a computer-generated environment and other users.” When you ask me about the metaverse, you’re informed that it’s “the natural conclusion to a story that begins with Mark Zuckerberg using his giant brain to streamline the process of objectifying women from the safety of his dorm room. That is a true thing that happened and we definitely don’t talk about it as often as we should, which is all the time. And ANOTHER thi-” but you have already quietly slipped out of my car at a red light.

Anyway, the metaverse conversation really got going in October 2021, when Facebook’s parent company (called Facebook) announced plans to change its name “to reflect its focus on building the metaverse.” An excellently chosen focus. Facebook could use its enormous platform and unlimited funds to address social issues or alleviate suffering or transform humanity for the better, but this sounds cool too. On October 28, it became official: Facebook, Inc. was rebranded as Meta.

This shift wasn’t surprising to those who have been paying attention. The artist formally known as Facebook owns a lot of other companies, and many of them are dedicated to expanding the virtual space. Examples include Indian technology company Jio Platforms, geotagging tool Mapillary, and virtual reality video game giant Oculus.

My boyfriend has an Oculus, which is a hilarious-looking virtual reality headset that he uses to ignore me. Just kidding! It’s more like a tool I rely on to keep him occupied while I watch Titanic again. (Sidebar: I love Titanic the film and Titanic the overall concept. The movie came out when I was seven, and I went all in. My parents bought me a large book full of juicy Titanic info, most of which was way too heavy for a seven-year-old because as you may recall, this was a stunning maritime disaster, but nevertheless I persisted. My mom’s friends would come over for coffee and be like, “Hey Brittany, how are you doing?” and I’d hit them with a sweet, morbid fact about Boiler Room 6, and they’d look at my mother with unspoken questions, but what could she do?! I was a historian.)

The VR capabilities of the Oculus are very cool and impressive. They gaslight you into having a number of compelling experiences! For example, there is a game in which you ride an elevator to the top of a skyscraper, and the doors open on a plank that’s sticking out into the sky, and the only objective is to walk out onto the plank, pick up some attractive item sitting at the end of it, and walk back to the safety of the elevator. When I tried to play this game in my living room, literally standing on solid ground, I panicked, got so sweaty I had to change my shirt, and swore to never put the headset on again. 10/10.

The metaverse combines the terror of the plank game with the terror of parents assigning their newborn a hashtag, creating a 3D social network. According to CBS News, in the metaverse, “Instead of a profile, you have an avatar, and so do your friends. Instead of a news feed, you have social hubs where people gather to share news, gossip and play games … Experts forecast that virtual reality, a $30 billion market in 2021, will more than triple to $300 billion by 2024.”

So what can we expect from the metaverse? The kind of ubiquity social media enjoys now, but even more immersive. Every big name in technology is working on metaverse products, but individuals can create virtual worlds, too. Meta even has tutorials for users so they can learn to build virtual environments. Like any internet creation, these vary widely in complexity, but there’s no denying the boundless opportunities that come with this kind of advanced technology.

I am still working through the trauma I experienced during those two minutes when I attempted the plank game, and I will likely be doing so for years to come. It was the Titanic of that week for me. But for those of us whose lives are already dominated by the internet (everyone), the metaverse may soon turn disparate online pockets into a single, unified world, one where we’re required to literally block out the physical environment around us to participate.

I’m just glad we addressed all the dangers of the original internet before embarking on this journey. Iceberg, right ahead!