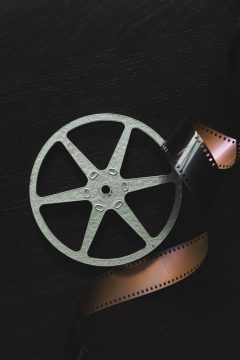 Social media marketing on Cape Cod requires familiarity with a range of platforms: Facebook, Instagram, LinkedIn, Twitter, and a number of junior varsity players that are on the rise. Social media has its challenges, but it’s definitely revolutionized the way we communicate. It’s a core part of our reality, but how would it affect our fiction? As a thought exercise, because it’s still a pandemic and activities are limited, we considered what some classic movies would have looked like had social media played a role.

Casablanca: When Ilsa arrives in town, Rick is prepared. The old flames have remained Facebook friends because each is too proud to remove the other, and he’s been following her check-ins religiously for years. He’s also looked at every last one of Victor Laszlo’s profile pictures and told anyone who would listen that “he can’t possibly be that handsome in person.”

Citizen Kane: When reporter Jerry Thompson is tasked with deciphering Kane’s last word, he heads to Reddit for help from the online sleuth community. They crack it in 45 minutes.

Singin’ in the Rain: Lina Lamont gets carried away one night and posts an Instagram Live showcasing her real speaking voice. She’s let out of her contract immediately.

Psycho: Marion Crane connects with Sam Loomis’s wife on LinkedIn, discovering he absolutely was not going to divorce her. The two women go on a road trip, stay at a charming bed and breakfast rather than a terrifying motel, and have a great time.

The Wizard of Oz: A tornado warning is all over Facebook, so appropriate precautions are taken. Almira Gulch has to leave town after some controversial tweets are made public.

It’s a Wonderful Life: Before George Bailey can freak out, Mary starts a Go Fund Me for the missing money. It’s fine.

The Godfather: Vito Corleone decides to find his own replacement on LinkedIn, avoiding a ton of drama in the process.

The Shining: Jack’s Facebook statuses get stranger and stranger until concerned friends check in. They suggest a weekly Zoom trivia night that keeps everyone sane.

E.T.: The TikTok community bands together to get E.T. home without government intervention, because children are the future.

The Shawshank Redemption: Armchair detectives prove Andy Dufresne’s innocence. He receives a multi-million-dollar settlement from the state and still moves to Mexico.