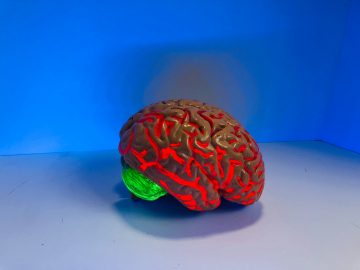 Effective social media marketing on Cape Cod requires a delicate combination of modern and traditional approaches. It’s important not to ignore the latest developments in the social media world, but we also wouldn’t recommend moving all of your marketing content to TikTok just because it’s the new kid on the block. The social media space is constantly changing and growing. There are always new platforms and technologies to look into, and one that’s caught my eye recently is Elon Musk’s Neuralink. Have you heard of it? It’s bananas.

The Neuralink Corporation, from the guy who brought you going to space again, is developing implantable technology for the human brain. The term they’ve chosen is brain-machine interfaces. Does that make your tummy bubble with anxiety? Same!

According to The Verge, the technology Neuralink is working on will include “a module that sits outside the head and wirelessly receives information from threads embedded in the brain.” You know, like a hearing aid, but terrifying. Granted, developing this technology could lead to unprecedented advances in medical treatment. Giving a paralyzed person the ability to control a phone or computer is obviously a worthy goal. But there’s a part of me that can’t help conjuring images of a technological dystopia where the line between human and machine is blurred at best and nonexistent at worst.

And I’m not the only one. At a presentation last summer where Musk essentially introduced Neuralink to the world, Max Hodak, the president of the corporation, confessed on stage that when Musk initially approached him about the technology, he wasn’t sure it was “a good idea,” but was eventually convinced. If that’s not a regrettable flashback scene in a sci-fi thriller, I don’t know what is.

At that same presentation, Musk said his goal was “to achieve a symbiosis with artificial intelligence.” Not risky at all. Nope. Full steam ahead.

But wait, there’s more. Just last month, The Independent reported that Neuralink is “working on a brain-computer interface that will allow wearers to stream music directly to their brain.” Dude, come on. Is this necessary? Are people really that disappointed with insanely expensive headphones and how well they work?

Again, there are plenty of positives that will come to light if Neuralink develops its technology appropriately. Musk has said the science “could help control hormone levels and use them to our advantage (enhanced abilities and reasoning, anxiety relief, etc.),” and the treatment of brain diseases could undergo a complete transformation. But I can’t help but wonder how our tech-obsessed society could be adversely affected by the whole ‘your brain is now a computer and your computer is now in your brain’ thing. How long will it take before social media giants partner with technology like this? How many years are we from Facebook feeds scrolling inside of our heads, or accessing Twitter with the right blinking combination, or tests of the Emergency Alert System that simply flash across our field of vision? It’s creepy! It’s all so very creepy!

It’s also worth noting that Musk is a questionable public figure. He often states “facts” on Twitter that turn out to be not so factual (must be going around). And some of his peers in the smart-rich-white-guy department aren’t my favorites, either. Though it wasn’t directly his fault, Mark Zuckerberg did end up compromising the foundation of American democracy with his late-night dorm room invention, and Jeff Bezos could easily eliminate a number of social ills and still be a kajillionaire but seemingly has no interest in doing so. I don’t know that I trust a member of that tribe to not let technological innovation get into the wrong hands.

Maybe I’m a pessimist. Maybe everything will turn out fine. But few phrases frighten me more than ‘We are developing brain-machine interfaces.’ Maybe ‘Brittany, there are no more tacos.’ But still.